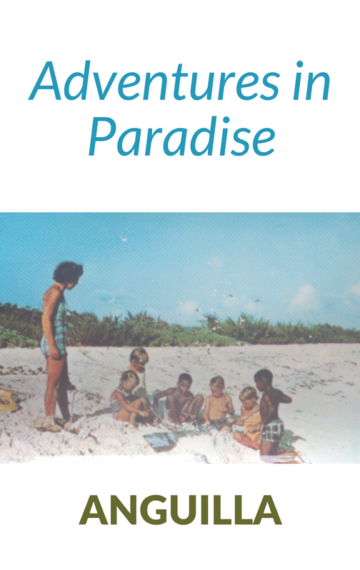 In the days before Anguilla was discovered by the chic and the famous, it was merely a quirky, barren and dysfunctional little island in the British West Indies, no less a paradise—in fact, more so—for being unknown, by which I mean, more accurately, known only to its 6,000 Amerindian and Afro-Caribbean inhabitants plus a handful of Brits and…one white American family who came to visit in the summer of 1962.

This is a love story between two families of different races, backgrounds, talents and means, but it’s not what you think. Probably the reverse, actually. And it is the story of their love for Anguilla and how that love spurred two of them, Jeremiah (the Anguillian father) and Helen (the American mom) to join forces in brilliant and undeterred madness to shape the hilarious miracle that was the Revolution of ’67, during which the islanders herded their 5,000 goats onto the airstrip to prevent British planes from landing; and during which the only injury was a Champagne cork to the eye of a bumbling British paratrooper; the only death, another of the invading Brits, a soldier who succumbed to pneumonia after he spent too long in a damp underground cave searching for a stash of hidden guns which of course didn’t exist. At least, that’s what the locals swore. Those feisty Anguillians.

A few decades later, in 2002, come rumblings of another sort of rebellion, and another love story, and so the madness and the miracles are handed down from one generation of indomitable misfits to the next.

I’m writing historical fiction here, based on an until-now buried and unbelievably true story that scarcely warrants any fictionalizing. My task ought to be a fairly simple one, because there’s need neither for invention nor for getting any facts straight. Nobody in real life, on- or off-island, has gotten any of the facts straight so far, in any case. Ask ten Anguillians about their rebellion and you’ll get ten different stories. Don’t bother; I can tell you what really happened because, yes indeedy, I was there. But I was only seven or eight and didn’t give a hoot about politics or independence at the time, so I’ve been interviewing my mother (see Helen above.) She’s 91 now; this provides me incentive to finish this book post-haste. Just kidding–Mom’s in excellent health, continues to buy Q-Tips in packages of 1,000, and has a memory that’s sharper than any 30-year-old’s.

One last note: many people mispronounce the island’s name. Anguilla rhymes with vanilla. Forget any foolishness having to do with Ung-ghee-yah. Repeat after me: Ang-gwill-lah. We limin’.